What do the letters of an orange-grove obsessed young man named Pliny Reasoner and an unknown woman’s handwritten romance novel have in common? More than you might think, as I have learned. I am a fourth year PhD candidate at UF, specializing in British imperial history. As part of my work for the library this year, I have been transcribing documents from the Pioneer Days in Florida digital collection. This extensive online archive presents many of the nineteenth century letters and diaries of the P.K. Yonge Library of Florida History.  Many  were written by people from somewhere else who came to Florida to assess its promise for a successful future and stayed to fulfill it.

I, too, am a transplant from the north. I grew up partly in the Midwest, partly in the Rocky Mountains of Montana. Comparing my experience of this state in the twenty-first century to the experiences of those from over one hundred years ago has enriched my appreciation of this diverse, fascinating region.

What do pioneer writers speak of most? The oppressive heat, the delightfully mild winters, the mosquitoes, the unusual food, and the variety of local flora. The first time I visited central Florida, I was as entranced as Florida’s pioneers were by the tall palms, the wispy Spanish moss draped over every tree, and the summer warmth that extended well into November, so different from the freezing, nine-month long winters of snow and ice I had left behind. But though I have enjoyed the variety and complexity of the landscape here, I would never have guessed that this region was once dominated by a single feature: the orange grove. 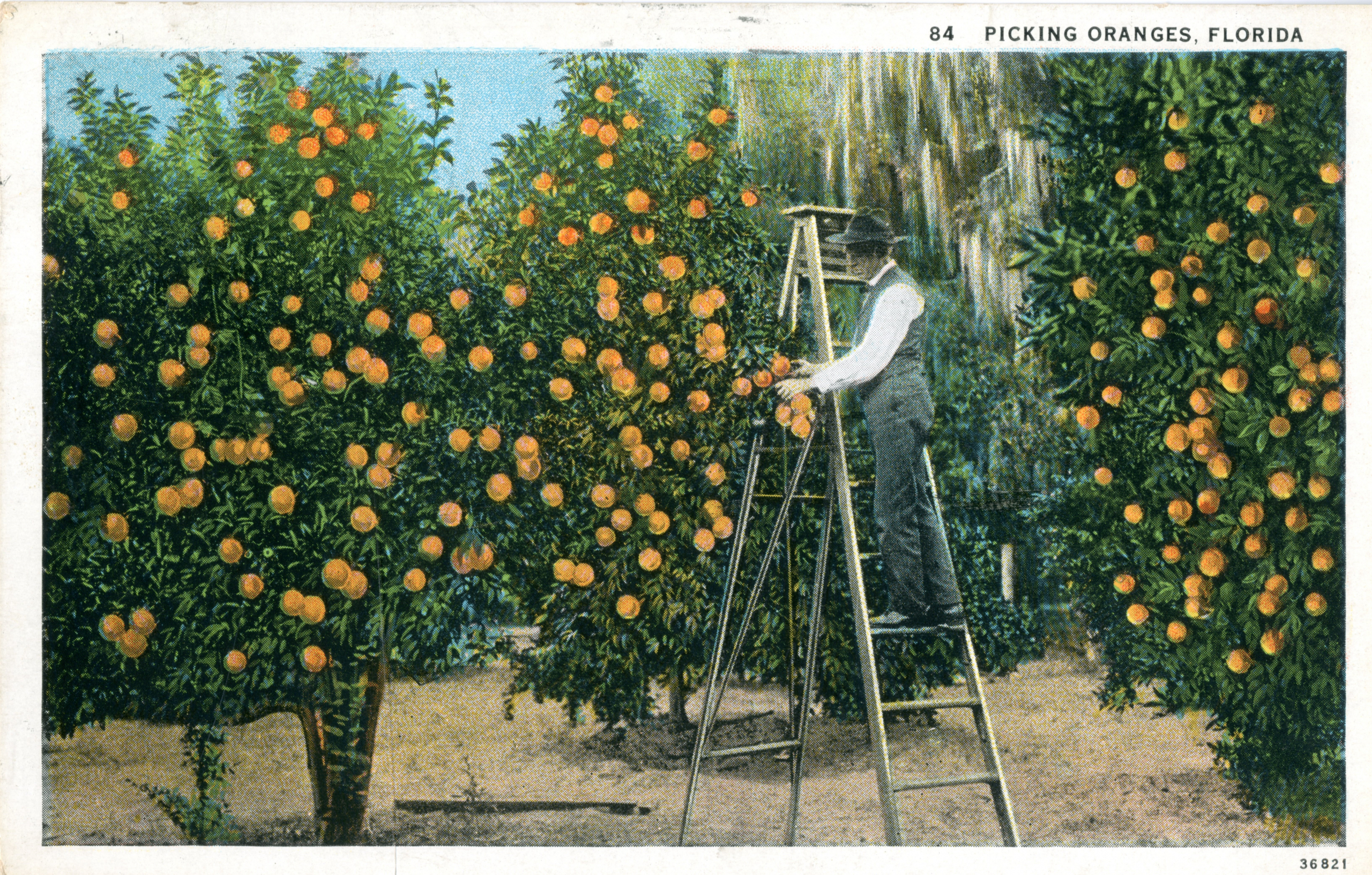 The allure of the orange grove clearly filled the imaginations of the pioneers of the past. As a young man, Pliny Reasoner, the eventual founder of the successful Royal Palm Nursery, wrote enraptured of their beauty to his family back home in Illinois. “Well,” he wrote in 1881, “for a flat country this looks the most beautiful to my eyes of any I’ve ever seen – Why you can’t imagine anything like how splendid it is. The sun doesn’t shine much. The sky is covered with these summer afternoon clouds (ball of cotton clouds) and it is just immense.” Reasoner’s enthusiasm for oranges led him to consume as many as 15 per day, rhapsodizing that “the Mandarin oranges could easily be peeled with kid gloves on I know. You take hold of the skin with your fingers and it peels right off.” His letters brim with plans for the pinewood land he intends to purchase near Manatee (apparently better, in his opinion, for growing orange trees than mangrove land), the budding saplings that will cover it, and the great profits to be made in the citrus business.

Orange groves proved so tempting to travelers and settlers they even inspired a romantic novel available in the collection, titled Daphne, or Wits and Wooing. Set in and around Jacksonville, Daphne follows the story of young English heiress Eleanor Barton as she falls in love with a local orange grower, Richard Proctor. The groves provide a colorful backdrop for their romantic trysts. When she sees Richard’s orange grove for the first time Eleanor exclaims that “the mass of trees with their golden fruit has a beautiful effect, especially the mandarins with their immense crop.”

Beyond their beauty, however, Eleanor learns that oranges are the lifeblood of the community, so that, when the not yet ripened fruit is destroyed by an unseasonable freeze one night, many of its members, including her would-be match Richard, are totally unable to recover from the financial fallout. “As the evening wore on,” the author writes, “someone would go out and report the temperature every few minutes with the invariable news that it was still falling, and it dropped—dropped—dropped—until when daylight came it was known that the very trees were frozen down to the ground. Never was such widespread ruin. These who had gone to bed rich or well to do, and few people in the country places had gone to rest at all, were now penniless.”

The Jacksonville settlement received yet another blow when Great Fire of 1901 tore through the city, razing much of it to the ground. The author describes the immensity of the disaster:

“Meantime the fire had spread with terrific rapidity. Sparks flew from house to house, from street to street, and as except in one or two streets the houses and roofs were all of wood, by the time one house was ablaze, the next was smoking and the heat was terrific. The conflagration as it spread gathered strength taking everything that came in its path, whether of brick or wood; one crumbled as quickly as the other. Churches and public buildings vanished. The light in the sky was seen twenty miles away and it was not until the wind dropped in the evening that hope arose of saving any of the city, and when at last the fire was stopped it was seen that an area two miles long by three quarters of a mile wide had disappeared.”

Of course, this is a romance and so the story ends happily when Eleanor uses her large fortune to restore the estates of her friends and her lover. However, the novel emphasizes the hardy natures of Florida’s settlers. Just a few months after the fire, Eleanor returns to find “a great change already in Jacksonville. Buildings had sprung up as if by magic. The debris of the fire had been cleared away and the people had taken fresh heart. The colony at Sevilla was much smaller. There were many empty houses and many abandoned groves but those who remained were putting in other crops and doing what they could to retrieve their positions. There was not as much gaiety, everyone was too busy.”

As a historian, and as a newcomer to Florida, it is a pleasure to become acquainted with the challenges and struggles, and the opportunities and triumphs of those who lived here so long ago. Opening a window to the past allows us to look with greater appreciation at what has been built by those who came before us.