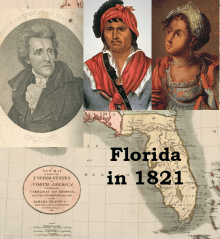 This year marks the 200th anniversary of Florida’s entry into the United States.  As a result of the Adams-Onís (or Transcontinental) Treaty, the two Spanish colonies of East and West Florida were transferred from Spain to the United States and became a single American territory, initially with twin capitals at Pensacola and Saint Augustine.

Although many residents had anticipated throughout the early 1800s that Florida would eventually be incorporated into the expanding United States, the actual change in sovereignty brought a rapid restructuring of their lives.  New settlers flooded into Florida in pursuit of land while established residents – former colonists, enslaved peoples, free people of color, and indigenous inhabitants – wrestled with the implications of new laws, a new political system, and a new set of values that promoted freedom for some while restricting it for others.

In this online version of our gallery exhibit we are highlighting several segments of  “1821 – The Americanization of Florida” which runs at the George A. Smathers Library, University of Florida, August 16 – December 17, 2021.

We start with the actions of Andrew Jackson as first governor for the territory and then consider the challenges facing different sectors of the territorial population.  We also re-create some examples of how people looked in the 1820s, with an exploration of period dress.

Read a Copy of the Adams-Onís Treaty, National Intelligencer, February 24, 1821

Andrew Jackson had important Florida connections even before he became governor in 1821.  He had led U.S. troops into Florida in 1814 during the War of 1812, seizing the city of Pensacola, capital of Spanish West Florida, and driving out a British squadron that was using the city and harbor as a base of operations to attack the American South.  From there he had to hurry his troops to New Orleans in order to repel a major British invasion of the Mississippi River Valley.

A few years later, in 1818, Jackson again commanded a military expedition that invaded Spanish East and West Florida, this time a contingent of U.S. troops, Tennessee militia, and allied Creeks.  His orders were to destroy the Seminole and Miccosukee towns of the Big Bend area in what became known as the First Seminole War.  Jackson went even further, however, capturing and executing two British citizens accused of aiding and abetting native groups and again seizing the city of Pensacola.

Despite the diplomatic uproar that these actions created, Jackson’s challenge to both Spanish and native authority in Florida underscored the fact that Spain could not hold on to the area.  Negotiation for a cession of Florida to the United States began in 1819 and the resulting treaty was ratified in 1821.  Jackson returned a third time, with an appointment as governor, expecting to deal with only routine concerns, like the evacuation of Spanish troops from Pensacola and St. Augustine, the disposition of the armaments in Pensacola’s forts, and the official ceremony for the change of flags.

His temper was soon roused, however, by what he considered unwarranted delays in seemingly perfunctory tasks.  Although he took up his assignment in late May, the change of flags did not occur until July 10th in East Florida and July 17th in West Florida.  Until that time, Jackson had to cool his heels in nearby Montpelier, Alabama, and then just outside of Pensacola, in a power-sharing arrangement with outgoing Spanish governor, colonel José Maria Callava.

Once he was officially installed, his style of leadership in Florida demonstrated his penchant for quick, overriding, and sometimes belligerent action, aimed chiefly at extinguishing Spanish law and custom while finding plum political appointments for his allies and friends. But political patronage ultimately came from President James Monroe, who ignored Jackson’s recommendations when handing out positions.

Feeling snubbed by the president, Jackson lost interest in keeping the governorship of Florida and plowed through his workload as quickly as he could.  Although he held office for only eleven weeks, his governorship had a major impact on the Americanization of Florida.  He implemented the ordinances that abrogated Spanish law and established American statute in the territory, and ultimately got some of his friends into official positions, where they would shape the course of the territory for years to come.

Unable to avoid controversy, however, Jackson concluded his tenure by getting into a heated dispute with José Maria Callava, and caused a scandal by throwing him in jail.  In October 1821, Jackson left Florida for good, returning to Nashville with his sights set on Congress and his friends urging a run for the presidency.

By Jason Zappulla and James Cusick

Neamathla, a  prominent Miccosukee headman, was among the first native leaders to realize that the transfer of Florida could have bitter consequences for indigenous sovereignty.  He had been an early target of the First Seminole War, when his principal settlement at Fowltown was attacked, and in 1821 he still controlled a large swath a land around the future site of Tallahassee.

The dilemmas that the transfer posed for him were symptomatic of those that other native leaders faced.  In an effort to foresee the ramifications of the change in flags, he met with Andrew Jackson at Pensacola; but the only thing he learned for certain was a foreboding allusion to plans for confining his people, and the Seminoles and Creeks, to a reservation.

Upon Jackson’s departure from Florida, Neamathla began meeting with his successor, Governor William Pope Duval. In 1823, Duval and Neamathla concluded an agreement whereby the land occupied by Neamathla’s main village of Cohowofooche was ceded to the territorial government to serve as the new capital of Florida – Tallahassee.

That same year, the Treaty of Moultrie Creek was signed, under which Neamathla and other Creek leaders reluctantly relinquished claims to their lands in north Florida in exchange for a reservation further south. However, that reservation was entirely landlocked, had no major rivers or other waterways, and was not particularly fertile, making it insufficient to support the 5,000 native people of the region. Because of this, Neamathla resisted its implementation and remained close to the Apalachicola River, on a small area of land he had managed to retain for his own use and that of his kin.

Anger over the terms of the treaty simmered for years and finally ignited into open hostility in 1835, when President Andrew Jackson signed the Indian Removal Act which authorized the federal government and the army to send tribes of the Southeast to the West of the Mississippi River. Seminoles answered by taking up arms in what would become the Second Seminole War (1835-1842).

Like other leaders, Neamathla made the best of the situation in Florida for a decade, trying to win concessions from the U.S. government, but by 1836, he could no longer tolerate American efforts to deport his people to the West.  He joined Creeks in Alabama in armed revolt. Defeated, he eventually led some 1,600 people into exile in Indian Territory.  He died there in 1841.

Among the people who wrote about Neamathla was the famed American writer Washington Irving, best known for his stories of Rip Van Winkle and the Legend of Sleepy Hollow. Irving based one of his fictional characters, Ralph Ringwood, on the exploits of William Pope Duval, Andrew Jackson’s successor as governor of Florida.  He recorded Duval’s account of meeting Neamathla during negotiations on the Treaty of Moultrie Creek and converted it to story form in “The Conspiracy of Neamathla: An Authentic Sketch,” published in an 1855 collection called Wolfert’s Roost and Other Papers Now First Collected.

This online exhibit features segments of the gallery exhibit at the George A. Smathers Library, University of Florida.  Text by James Cusick, Jason Zappulla, and Rachel Laue.   Design and installation by Lourdes Santamaria-Wheeler and Elizabeth Bouton.  With thanks to Bridget Bihm-Manuel for photographs.

Continue to the Next Section