What is the Great Speckled Bird?

The Great Speckled Bird was an underground alternative press publication.

The South, historically, has been characterized as a monolithic legislative echo-chamber painted in  All-American red. It should not be forgotten that southern legislatures have been historically associated with violent rhetoric and actions regarding race, class, gender, and sexuality. However, for every piece of legislation passed there were groups who spoke out against it.

The Great Speckled Bird was a weekly periodical where people could exercise their First Amendment rights to oppose a Southern agenda that promoted social injustice and hate rhetoric.  Published out of Atlanta, Ga., the weekly (affectionately referred to by its staff and readership as “The Bird”) covered news in the United States’ Southeastern region from 1968-1976.

Forged in the counterculture of the 60s, the Bird began as an anti-war bi-weekly newsletter written by students at Emory University. The newsletter evolved into a 20+ page paper, with 30+ staffers, and a circulation of 23,000 at the height of its popularity. Anti-establishment and radical left perspectives guided the coverage of local, regional, national, and international news. Issues considered taboo by the mainstream media were given a platform by the Bird, which offered didactic and intense criticism of American and Southern society.

Over the course of its run, it was recognized as a voice for left, progressive, and alternative viewpoints. Bird staffers tackled the gargantuan task of reporting radical leftist ideas in region with a conservative majority. Stories covered such topics as anti-war, food accessibility, welfare rights, queer liberation, civil rights, prison abolition, and reproductive rights. The Bird faced constant push-back for stances that were unpopular in the South that its offices were bombed in 1972.

For Florida readers, the 1972 issues covered a variety of topics that featured issues in the state.  The February 1972 issue recounted a strike by Florida’s migrant farmworkers for a renegotiation of retirement benefits. The Bird’s editors stressed that solidarity among racial lines was important in keeping the strike strong. At the end of the article, they provided information on how readers could support strikers.

The Bird also regularly featured articles about the 1972 presidential election, in which both the Democratic and Republican national conventions met in Miami.  Coverage of the conventions provided details on counter-protests, state officials’ tactics to deter mobilization of demonstrators, and the political substance of the campaigns.

The Bird’s editors were dedicated to their anti-war stances and pressured the democratic administration to adopt a cease fire in Vietnam as part of the campaign platform. Leading up to the Miami National Conventions, the Bird ran coverage about influential organizations like the Vietnam Veterans Against War (VVAW) that demanded the end of the United States’ occupation in Vietnam.

The state expected and leftists planned for political demonstrations during the Democratic convention. One of the important groups leading demonstrations was the VVAW.  Although militant in its opposition to the war, it was known for keeping its demonstrations nonviolent, which gained public sympathy and respect.  According to The Great Speckled Bird the state tried to “neutralize” the credibility of the VVAW by forcing members to appear before a grand jury in Tallahassee on drug charges.  With part of its membership held up at the grand jury, the VVAW’s presence in Miami was much smaller and had less impact.

In other articles, a Bird journalist known simply as “-roger” called on the left to speak out with a unified political voice and to urge its priorities on the Convention. Although expressing misgivings about the nomination of Senator George McGovern for president, “-roger’ implored the Bird’s readers to unite behind McGovern, arguing that a Democratic win would end the war in Vietnam, which was the Bird’s, and subsequently the left’s, biggest agenda.

The Bird also covered the complexity of issues that existed among leftist southern organizations during the Democratic National Convention. The marches and demonstrations were reported by Bird staffer “-ramblin rose,” who concluded that demonstrations had either developed into a celebration or devolved into a mockery, depending on what organization you represented. A quote taken from a member of the National Welfare Rights Organization (NWRO) encapsulated the frustration that some on the left felt during the convention. “This was supposed to be a demonstration, and now the hippies have turned it into a goddamned festival.”

When the Republican National Convention came to Miami, The Bird was especially critical of how counter-protests were organized.  Violent clashes with police got the attention of mainstream media, instead of the larger messages that leftists wanted to publicize.  “-roger,” who had covered these events, characterized the demonstrations as ineffective and chaotic. In his view, the Miami Convention Coalition, the umbrella organization for the protests. failed in their mission because they did not connect and unite with local grassroots organizations such as the Senior Citizens Investigation and the VVAW. He went on to describe what the MCC should have done to propel the left’s message forward. 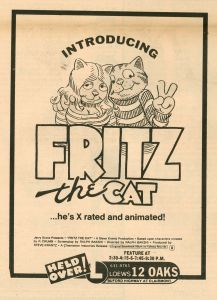 The coverage prior and during each Convention revealed how the radical left fought with itself even while trying to oppose right-wing policies.  The Great Speckled Bird was in the thick of the counterculture movements.  When browsing issues, modern-day readers may find that the 1970s counterculture was grounded in real social issues, and not like the stereotypes and tropes that were later perpetuated about it.  But the Bird definitely reflected self-expression of the times, using groovy slang, expletives, and unconventional writing.

The Bird gave voice to those who faced social injustices, while also covering many other aspects of counterculture. There were film reviews for releases such as t Fritz the Cat and A Clockwork Orange.

Music reviews and show promotion covered genres like bluegrass, rock and roll, country, and jazz. Readers could find advertisements for theatrical shows, crafting classes, bike rides, and chances to participate in guerrilla theatre. The Bird included space for information about contraception, counseling on pregnancy, and abortions.  It also featured where people could get basic necessities, including food.

The classified section was deemed “the most read section.” Classifieds were small entries submitted by readers that were published under sub-headings like: personals, freebies, music corner, wanted, for sale, reform and revolution, and miscellaneous. Sometimes the editors used headings that were puns such as “Fur Sail” and “Miss Sell A Knee Us.” Classifieds could be submitted from anywhere in the country. The most common classifieds were from incarcerated people, requesting letters from the community.

In Southern fashion, the Bird created space for expressions of joy among the injustices that had harmed the communities they represented. Twenty-first century readers can follow the diverse perspectives of southern leftists’ and discover the discourse of the 70s social movements.  A full run of The Great Speckled Bird is available online through Georgia State University.  Issues for 1972 (No. 1 through No. 51) are available in Special Collections at the Smathers Library, University of Florida.