In the 1920s, the small movie production company of Norman Studios, in Jacksonville, Florida, became a vehicle for starting the careers of numerous African-American actors and actresses.  Prominent among them was John Lawrence Criner (1898-1965), a member of the famed New York acting group The Lafayette Players, which also included Oscar Micheaux and Charles S. Gilpin. In 1926, during the era of silent film, Criner got his first starring role in The Flying Ace, an aerial adventure story set set at the end of World War I. He played the lead, fighter pilot Captain Billy Stokes, who joins co-star Kathryn Boyd to break up a gang of thieves responsible for robbing local payrolls.  The film featured a dazzling aerial chase scene, and had a specially constructed replica Curtiss J.N.D. 4, which Criner and Boyd could operate and act from without ever leaving the ground. Kathryn Boyd’s role as flyer-in-training Ruth Sawtelle was probably a tribute to famous African-American pilot and barnstormer Betty Coleman, who died in a crash at an air show practice the same year The Flying Ace was released.  As Sawtelle, Boyd escapes from a burning plane by climbing a rope ladder to the safety of Billy Stoke’s craft.

The Flying Ace came out in the mid-1920s amidst the rise of numerous movie studios promoting storylines for African-American casts.  Principle among the leaders was Oscar Micheaux, the country’s first major African-American film producer, who used film to push back against the Jim Crow oppression of the era, incorporating social commentary about lynchings and other violence into his movies.

Norman Studios, by contrast, was owned and run by a white filmmaker, Richard E. Norman, but he shared Micheaux’s interest in promoting film as a medium for Black actors and actresses to get meaningful roles.  Norman made movies for their entertainment value, without the political or social overtones of Micheaux’s work, creating adventure stories that featured heroics, romance, and thrilling special effects, such as train wrecks and air planes on fire.  Posters for Norman Studios’ movies boasted in bold type that they had “all colored casts” along with the names and pictures of the stars. 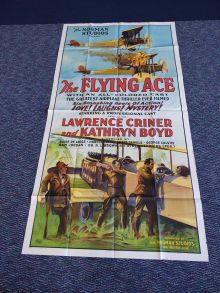 Two films by this studio helped to establish Lawrence Criner’s reputation as an actor.  After The Flying Ace, he went on to star in Oscar Micheaux’s The Millionaire (1927) and then in Black Gold (1928), another Norman Studios production, which again paired him with Kathryn Boyd. His career continued into the new era of the talkies, and he had lead or starring roles in 30 additional films, many of them produced by Hollywood’s first Black studio, Million Dollar Productions, with co-stars that included Lena Horne and Ruby Dee. Criner’s last film appearance was in The Jackie Robinson Story (1950).

Another early star of the stage, Anita Bush (1883-1974), began her acting career at 17 and went on to become founder of the Anita Bush Stock Company of Harlem, the acting troupe that later became  the Lafayette Players.  Two of her film roles were as leads in Norman Studios films, The Crimson Skull (1922) and Regeneration (1923). 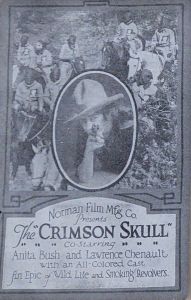 Promotion of films from Norman Studios typically emphasized their high quality production, attention to detail, and action-packed plots.  The press book for Black Gold, for instance, assured theater owners that they could count on high ticket sales and packed seats by booking the movie.  “The cast need no comment. They are leaders in their profession,” Richard Norman noted.  “The story can’t be beat for thrills.  It’s real and staged among the proper atmosphere . . . I was able to secure the whole-hearted cooperation of the Standard Oil Company, who were drilling several oil wells on the Tatum’s property which were best to film, and through their assistance Black Gold is authentic from every drilling detail.” 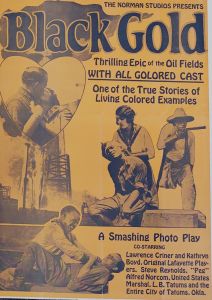 Film footage from Norman Studios productions is now rare. Movie reels for most of the films did not survive to the present, and the plots and scenes are known only from posters, press books, window cards, stills, scripts, and other by-products of their production.

The Flying Ace, however, is still available in completed form, available as part of the collections on the five-disc DVD set “Pioneers of African-American Cinema,”  and was recently added to the Library of Congress’s National Film Registry.